Curious about the capped spigots in the campground I wandered into the Coffee Creek ranger station. A young looking ranger with piercing blue eyes and a military hair cut greeted us shyly.

“Yeah, I was wondering which of your campgrounds have water.”

“I’m not sure miss, I’ll have to ask my supervisor.” He disappeared into the offices in the back and was promptly replaced by another ranger in baggy forest service pants and a cobalt T-shirt that hugged his muscular arms. He looked like a younger George Clooney but with bright hazel eyes and a casual manner.

“How can I help you today?” He asked, a big grin stretching across this face revealing even square teeth. He sank into the chair behind the information desk and leaned back, his hands folded behind his head.

“I was wondering if there are any campgrounds with water?”

He laughed, shaking his head and pulled out a blue piece of paper, set it on the desk and leaned towards me. “Well here’s a list of all our campgrounds and their amenities but I’ll warn you, its not up to date. Most the sites with camp hosts should have water—course Ackerman doesn’t.”

“I’ve been in a quite a few sites with spigots but they’re capped. Is it because of the drought?”

“Sure is,” he leaned back a little further this time. “All the wells are dryin’ up. When the well goes dry we have to cap it because you don’t want stuff crawling up in the pipes. Even our well here at the station is dry. Few years ago it produced 30 gallons a minute. Last year it was down to 2 gallons a minute. This year, nothin’. We have to ship water in so the guys can shower. The water table is just so low with the drought.”

“How about Trinity Lake, is the water level really usually at the tree line?”

“Yup. All the red dirt should be underwater and when you drive along the road just north of there, ya know?” I nodded. He continued on in a relaxed tone, “there should be water on both sides. This is the second year that it’s been real bad. There was no snow here this year. Few years ago they bought us snowmobiles to go survey the snow pack, but we only used them once. There just hasn’t been snow.”

“Nope not at our survey sites. We have a series of places we go to and see how much snow is out there—eight, ten feet. But there’s been nothing.” He shook his head. “See the problem is we got all the water but all the politicians are down south and they want the water. Everyone needs water; the Indians want their fish and the rest of people want food—agriculture[*]. I’d hate to be the person making that decision.” He shook his head.

“What about water coming out if the dam?” I asked curiously.

“That’s why the got us the snowmobiles. We measure the snow pack then people with big brains do some crazy calculations and figure out how much they can take. But there’s no snow so I don’t know what they’re going to do. I just hope when the fires come we have water to fight ‘em with.” 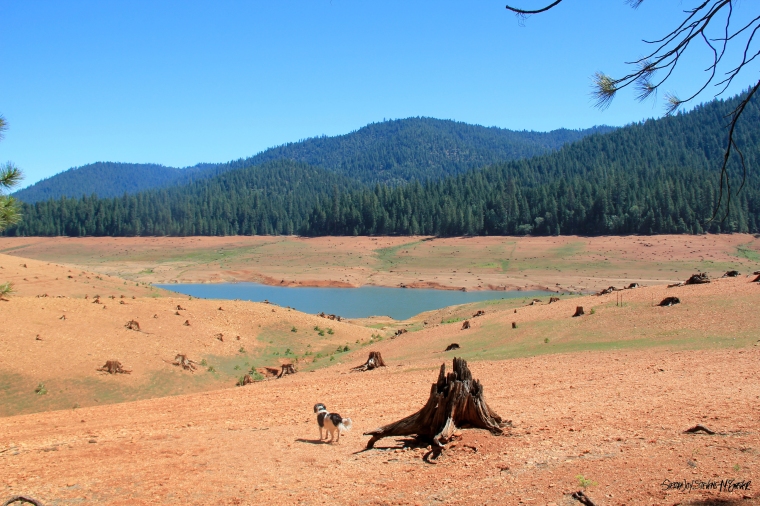 That night we pulled into a campground along the main section of the Trinity Lake[†]. In the morning Jack and I walked through the pines that clicked with the high pitch movement of cicada wings to the edge of the forest where the ground turned red and rocky. A warm breeze blew through the valley and up the dry lakebed over us and into the trees behind us. We moved towards the water below, down and down. The iron rich soil was made of fine sediment that gave way underfoot and sharp angled rock. A faint fuzz of grass sprouted up and covered swaths of soil. Giant dark tree stumps, stoic and weathered from years underwater, stood as reminders of the forest that once had stood here, before the now drowned city[‡], before the damn. Still I moved down, careful of the steep sections and broken bits of glass and other trash lost by happy boaters years prior when the lake was full, the boat ramps active and the surface of the lake a happy buzz of motors and laughter. Today it was quiet, devoid of the noise of mankind, dry and desolate.

We finally reached the lake, a least a hundred feet below the tree line[§]. The saturated soil sucked at my feet and pulled me into it until me knees were covered and I had to struggle to break free. I reached back into the holes where my feet had been, shoulder deep, to retrieve my sandals. Jack swam glorious circles in the warm, turbid aqua water. With each stroke of his feet he stirred up the bottom until he was swimming in a swirling orange liquid. He came out orange and stayed that way until he got a good long swim in fresher water.

Jack and I walking along the bottom of the lake

Its hard to really feel the drought when water still runs out the the faucet. In a place like this you can really see it.

The lake is looking more and more likes the river it once was.

[*] The water in Lake Trinity is captured and stored for the Central Valley Project and provides water for agricultural irrigation. It also provides hydroelectric power.

[‡] The original town of Trinity Center was flooded when the damn was built. The town today lies just a few miles north of its original location.

[§] The water level in the lake is currently 122 feet below the spillway and receding at 1 foot every 2.5 days. The lake was at 48% of capacity in January of 2014 and some of the boat launches were a mile from the water’s edge.