The wave known to the world as Jeffery’s Bay, or J Bay, is claimed to be the best right in the world. With all the miles of coastline, this is a big claim for a wave.

We arrived with a big swell that had the surf town buzzing with excitement. As a cherry on top, offshore winds were also predicted for the entire swell.

The beach at J Bay is a paradise for shells. Within the first 15 feet of our walk I found 5 abalone shells, small and more oblong than those in California. The sand looks as if it were all made of crushed shells, which wash up in hordes. I love sifting through shells, examining what lives out in the water beyond the beach, comparing them across regions and searching for treasures. Here the shells, like the climate and scenery, are reminiscent of home: Mussels, more deeply blue and purple than ours. Delicately curling snail shells, blue-black and red and white stripped with a shape perfectly mimicking the pink ones we have in California. Crazy worm tube shells, limpets, barnacles; so many familiar shapes with their African coloring.

The long cream colored beach extends as far as the eye can see, inviting you to walk its length for miles and get lost in thought. The entrance into the sea however is less inviting: lined by massive jagged black rocks that the surf surges through and pounds upon.  Getting in and out of the water is tricky, and must be done through secret “keyholes,” or open areas, in the rocky reef.

The “Point” breaks at sunset along the shell strewn beach at Jeffery’s Bay.

Dave and I paddled out at “Point” on our first day. Waist to head high waves peeled perfectly, as if made by a machine, from the point, a distinct curve in the beach, down the shore for perhaps 100 yards. There were two locals guys in the water, both exceedingly friendly. We traded off waves, hooting and hollering at each other.

The entire time I thought about the white sharks we had swam with a few days prior and each time I noticed the offshore winds blowing me away, I paddled strongly towards land and reasoned with myself that I was not the target food source of any shark. 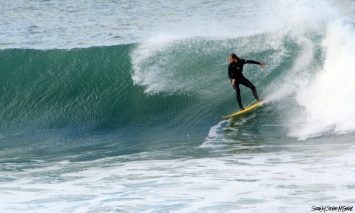 The swell built through the night and by first light the next morning it was double overhead and firing. The water was clean and groomed by slight offshore winds, the sets rolled in from a far and pealed down the beach. Storm clouds came and went through the day bringing bouts of downpour and dancing sunlight. 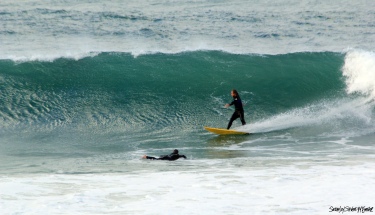 Dave surfed his guts out, breaking a board in the process, but didn’t let that stop him from a third and fourth session before our drive to Port Elizabeth and pending departure to Victoria Falls.

Dave’s first wave of the morning was the longest I think I have ever seen. Starting way up on the point, near Bonyards, the wave fired 400 yards through the entirety of Supertubes. At the end I could visibly see him lean back and give an arm pump of enthusiasm.