A country known in the western world for having one of the most horrible genocides in recent history blew my expectations out of the water with its beauty, cleanliness and infrastructure. Plastic bags, the long-lasting litter of the ‘third world’—and much of the ‘first world’ as well—have been outlawed in Rwanda. Plain and simple: plastic bags are illegal[1]. In the city and along the country roadways the ground is free of the heaps of trash so commonly seen littering the landscape. 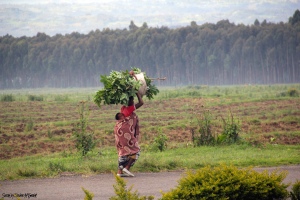 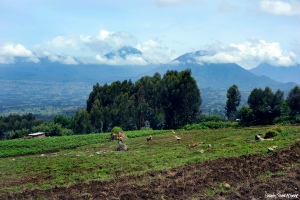 Known as the land of a thousand hills, the country rolls its way up to the mountains where it borders Uganda to the north. The importance of agriculture can be seen across the hills, mostly deforested, terraced into steps and cut into a patchwork of green and yellows. From the fields, children run to the sides of the road to wave enthusiastically at passing cars.  Women dress in elaborate, vividly colored clothes. Sleeping babies, tied on by colorful fabrics, form bulges on their mother’s backs. People walk along the sides of the roads carrying heavy loads of lumber, charcoal and agriculture, under both arms or balanced on their heads.

The genocide memorial in Kigali stands as an educational reminder that the misunderstanding, separatism and hatred has led to ruthless slaughter, torture and extermination of innocent people, not just in Rwanda but across the world. In the 1990s, in the matter of a few months, a million Tusti and moderate Hutus were massacred and the green Rwandan countryside was painted red with their blood, their bodies floated down the wide rivers, their remains were eaten by stray dogs[2].

Outside the memorial, 258,000 people lay together in mass graves of gray cement bordered by roses. Inside storyboards relay the history of colonialism, favoritism of the Tutsi minority, the racially minded ‘divide and conquer tactics’ of the Europeans, building racial tensions and the outbreak of slaughter.

The last exhibit was dedicated to the children of the genocide. Large photographs of victims with their names lined the walls, below them a placard read their age, favorite things in life, something about their personality, their best friend or their aspirations, and finally the cause of death. Smiling faces of adorable children glistening with innocence peered down at us, and in front of us, on the placards the reality of their fate: shot, stabbed, slammed against a wall. Some were killed by people they used to trust and love—neighbors, friends, babysitters, extended family. Tears poured freely down our faces.

On the wall smiled an eight year old boy name David with bright eyes and a mischievous grin. His favorite sport was soccer. His favorite food was eggs. His dream was to become a doctor. He was hacked to death by a machete[3]. We held each other and sobbed.

I left the museum thoroughly shaken, drained from crying and struck by human capacity to hate. As we drove through the city, I looked at the people milling through their daily lives, stuck in traffic, chatting on the sidewalks. Each and every one of these people had been touched by the genocide. Most of them had lost loved ones, a few were the only survivors of their family, some had taken part in the killings. These smiling people had seen atrocities more horrible than I can imagine. And yet here they were, proving human strength and capacity for healing, living in a country where mentioning race could now put you in jail. The people are rebuilding through understanding and forgiveness. After the genocide hearings took place where people told of the unthinkable things they had done, they detailed how they killed their neighbors, they apologized and they were forgiven. This was not the case of the masterminds behind the genocide, but for the average person swept up in the catastrophe, this ‘African justice’ of admittance and reconciliation was the path used to bring the country to the beautiful, vibrant place that it is today[4].

Division of people by race, religion, income, sexual orientation, anything at all, has lead all over the world to blame, mistrust, hatred and violence. It is so important for all of us to always speak out against this segregation and promote acceptance, understanding and love for our fellow people. We are all citizens of the world, unique, interesting and wonderful in our own right.  Let us get to know our neighbors and learn from our differences how to be better, more innovative and in touch with what makes us, in the end, all the same. 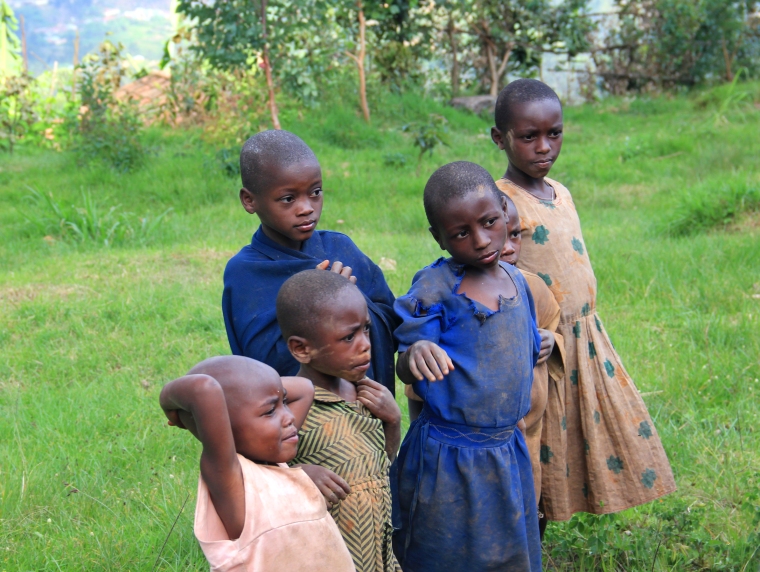 [1] The rest of the world would do well to follow Rwanda’s example. Read more about the ban on plastic bags click here

[2] These details came for our guide who told us his memories with a very heavy heart. He said to this day a lot of the people in Rwanda don’t have dogs because it brings back too many painful images from a dark a bloody past.

[3] This young boy was the same age as my Dave was when he was killed. They shared the same favorite food and sport. They both aspired to be doctors as kids. My Dave is now a doctor.

[4] I couldn’t help but wonder what degree of turmoil still writhes beneath the surface, wanting to believe in healing, fearful of hidden demons that may remain.